Post your tips & tricks here for creating slide shows with ProShow Gold. This could include suggestions for style and content in addition to working with the software itself
Post a reply
6 posts • Page 1 of 1

I have created a show that has 175 images, 8 soundtracks and 11 short avi's. Although it had started to get slow doing adding slides and doing adjustments,it is fine tuned now and works great without glitches.

This show will be shown thru a projector. I created a single .exe, tried it out and it look fabulous on the screen but it crashed a few times during play. It could have been a loose connection between the lap top and projector, but my time to use the borrowed projector for test purposes was limited so I'm not sure. In case it was the show content that caused the blip I want to have a backup plan.

I read somewhere about splitting a show so I went ahead and broke it into 3 shows. Is there a way , if i output each of them as an .exe ,which is suggested for the best output when using a projector, to tie them together so they will run as one complete show with a pause between the parts 1-3 or am i stuck with burning the 3 shows to a single DVD.

Cheers and THANKS for your continued help.
Top

Doesn't matter the media for the output--DVD or EXE. Just include all three shows in the output and make sure the options for "Play All" and "Loop All" are included on the menu page. What you'll have is a menu that lets you select one show or play them all once or play them all continuously.

Dick
"It is the mark of an educated mind to be able to entertain a thought without accepting it." Aristotle ((PSG, PSE & Fuji HS20 user)) Presentation Impact Blog
Top 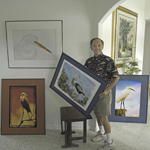 WOW!! Thanks so much for your speedy replies. I went and did what Dick suggested and it worked like a charm. FANTASTIC HELP.This is currently all on my PC. The shows are combined into one .exe and the play all/loop all functions work as you said.

So one more question and it may sound stupid because the #'s regarding the computers installed memory and the size of the show make it appear that I have TONS of room. The COMPLETED show is now on my PC. I will be using a projector and running the show through my laptop, an HP PAVILION Entertainment PC that has not been used a lot and is fairly new.Unfortunately my knowledge of the in's and out's of ANY computers technical aspects regarding Ram etc are very limited.I can usually figure out how to use most software from help files and places like this.

I have the option to copy it directly to the hard drive or put it on a CD/DVD or on an 8 GB SanDisk portable drive and run it through there. Any pros/cons to which way I go?
Top

NICE ! Looks like you have plenty of computing power

WOW by my standard that's a really big show. I make one every two weeks for my local club and in round numbers a 3 minute show usually averages about 10 or 12 Megs

In spite of the computing power you have "" my non technical explanation is " with 100 + meg shows the technical issue becomes the pipeline between the DVD player & the computer gets overwhelmed causing an occasional hiccup or hang up.

the plus of putting on your hard drive is It's the best it's ever going to play the only downside is you have to lug your computer around as opposed to a thumb drive ( plus of course it uses up space) But you have plenty for now
pixelpusher
My Gallery http://www.photodex.com/share/berniehynes
Top

Thanks pixelpusher. Put it on a thumb drive and transferred it to the HD of my laptop and it looks great.Appreciate your feedback. Cheers
Top
Post a reply
6 posts • Page 1 of 1